Sovereignty Is Back: UNSG Ban Ends Paradigm of State Accountability

According to AP, new UNSG Ban Ki Moon makes a poignant start in his new job -- by changing the basic direction of the UN from "pro-state accountability" to "anti-interference in domestic affairs":

New U.N. Secretary-General Ban Ki-moon ran into trouble on his first day of work Tuesday over Saddam Hussein's execution when he failed to state the United Nations' opposition to the death penalty and said capital punishment should be a decision of individual countries. The U.N. has an official stance opposing capital punishment and Ban's predecessor Kofi Annan reiterated it frequently. The top U.N. envoy in Iraq, Ashraf Qazi, restated it again on Saturday after the former Iraqi dictator was hanged. 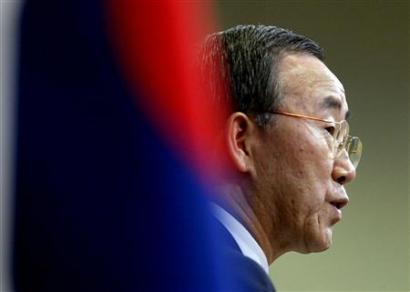 Ban, however, took a different approach, never mentioning the U.N. ban on the death penalty in all its international tribunals, and the right to life enshrined in the U.N.'s Universal Declaration of Human Rights. "Saddam Hussein was responsible for committing heinous crimes and unspeakable atrocities against Iraqi people and we should never forget victims of his crime," Ban said in response to a reporter's question about Saddam's execution Saturday for crimes against humanity. "The issue of capital punishment is for each and every member state to decide."

His ambiguous answer put a question mark over the U.N.'s stance on the death penalty. It also gave the new chief an early taste of how tricky global issues are, and how every word can make a difference. Michele Montas, Ban's new spokeswoman, insisted there was no change in U.N. policy in what she described as "his own nuance" on the death penalty. "The U.N. policy still remains that the organization is not for capital punishment," she said. "However, the way the law is applied in different countries, he left it open to those different countries."

Can we just put this remark aside as Ban's "personal nuance"? Probably not. First of all, there is no such thing as a personal pov of a leader in this kind of position. Danish PM Anders Fogh tried it a couple of years back, but there can be no discrepancy between the PM and the privcate person's attitudes and beliefs -- not in the public sphere at least.

Why is Ban's stance on the death penalty so significant? Because the reason he uses to justify the absence of condemnation of the death penalty is something that goes fundamentally against the strong UN intervention paradigm of the 1990s.

The paradigm consisted -- consists -- in the same kind of accountability principle which is at the heart of the US National Security Strategy: states sovereignty i, must be, curtailed by their responsibility vis-à-vis their own citizens. If they fail to treat their citizens according to a set of lowest common denominators -- human rights factored with a dose of pragmatic reality -- they can be held responsible to "world society". What "world society" means in practice is then the stone of contention: should it mean the UN Assembly, The UNSC, the West or the US or what? Of course an argument can be made that the countries that do fullfil these criteria are already identified: its the OECD, and that they have a certain moral capital to spend here. In this sense, the UN intervention paradigm, which has been perceived as very leftist in some policy circuitws in the States is inherently close to much of the moral part of the neocon paradigm -- they sharre rationales, but differ just on who gets to decide. Kofi Annan spoke out on several occasions for this paradigm (from the UN perspective) -- notably in a 1999 Economist "by invitation" oped.

Against this paradigm stands another, the non-intervention or non-interference paradigm supported notably by all the dictatorships of the world and many developing countries, including India and China. It is best expressed in the principles of panchsheel, ironed out in common by India and China, are also the principles behind the Cold War non-aligned movement. As explained in this post, the panchsheel are also at the heart of China's African strategy and concrete policies. Arguably, today's basic grand strategy battle is between the human rights, pro-interference agenda -- and that of the right to oppress and mistreat your citizens.

Ban now visibly opposes the former concept, even on a seemingly small subject. I do not believe this to be a gaffe, as hinted in the AP article. It is a symbolical message from Ban to his supporters: the UN shall henceforth not be used to circumvent national sovereignty -- "Go do what you please, we won't mind." The momentum of freedom is indeed waning.